Whether you want to work in Austin, Toronto, or Remote, we're hiring for them all! >>

There are only a few more days until the 2010’s (20-teens?) have elapsed and we wanted to reflect back on how amazing this past year has been for Certain Affinity.

We kicked off 2019 with a bang, launching our updated website and announcing our plans for a new studio north of the border in Toronto. Certain Affinity already contains the first two letters in Canada, so this felt like the perfect location allowing our studio to expand and attract even more talented developers.

Around that same time we put out our newest sizzle reel showcasing a smattering of our talents, while also putting the final touches on Crackdown 3’s multiplayer co-development as it went out the door to share agility orbs and Terry Crews with the general public.

With co-development going strong, we felt it was time to honor one of our own while helping to progress the careers of future game developers. Via a rich partnership that has been forming for many years, we teamed up with SMU Guildhall to create the Nels Memorial Scholarship (read more about Nels here). Through this memorial scholarship, we’re commemorating the life and work of Nels Nelson to continue his legacy of excellence, generosity, and leadership by supporting talented future game developers. 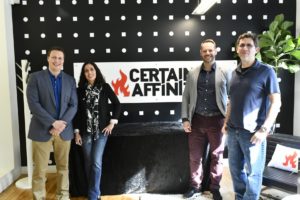 Only three months after announcing our new Toronto studio, we cut the ribbon and opened the doors alongside Toronto’s Mayor John Tory and others. Our Toronto studio continues to grow to this day, and we’re hiring developers from nearly every discipline to join us and work on our future projects.

As the summer arrived in Austin, we continued to grow as a company. Even with Max claiming “I never want the company to grow to more than 50 people” we eclipsed 200 full-time employees. This was accomplished not only by ignoring his own quote, but starting up additional co-development projects, while continuing to work on our own internal IP. 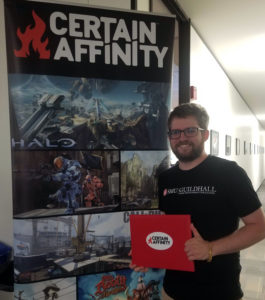 For the final three months, it was time to end the year on the same high notes as the beginning. October started it off by awarding the inaugural Nels Memorial Scholarship to Tyler Wolverton. It’s an absolute honor to have Tyler carry the flag of what Nels stood for, and we were honored to be able to present it in person at SMU. In addition, we continued our work north of the border as the ESAC accepted Certain Affinity as their newest member, shining a light on our commitment to our new studio.

November 1st will always be an important date as it marks our anniversary and this year Certain Affinity officially became a teenager hitting the big 1-3. Alongside all of the above milestones it has been a banner year for the company through expansion, growth, new projects, and more. 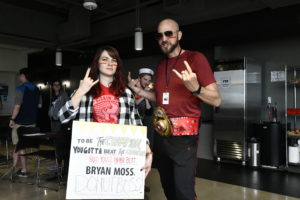 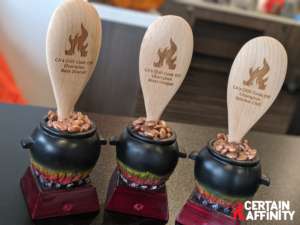 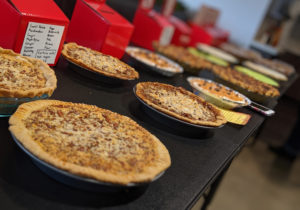 Throughout 2019 we also celebrated many small victories as we crowned new winners across multiple competitions including “Best Chili,” “Best Pie,” “Best Salsa,” “Best Gingerbread Creation,” “Best Halloween Outfit,” and “Best Ugly Sweater,” while also crowing a new “Watermelon Eating Champ” and “Doughnut Eating Champ”. The competition for each of these has only increased with our number of employees and general attention to detail.

We also gave back as a company, as one of our core benefits is 16 hours of paid Volunteer Time Off to full time employees, resulting in various opportunities such as participating in the CASA Charity 5K, gathering needed items for Meals on Wheels, and supporting Red Door Family Shelter in Toronto. We actively provided our team with charitable opportunities throughout the year, and hope to expand our reach even more in 2020.

2019 has been an absolutely fantastic year, and we’re incredibly excited about what we already have planned for 2020. Look forward to some fantastic announcements from Certain Affinity coming soon™!