[PRESS RELEASE] Certain Affinity, one of the largest independent video game developers, today announced that its Toronto studio has just been awarded the 2021 Canadian Games Award for “Studio of the Year.” The Toronto studio, which last week celebrated its second anniversary, was selected for this honor against competitors with established studios, including EA Motive, The Coalition, Thunder Lotus, and Phoenix Labs.

“We’re really starting to hit our stride in Toronto across all of our amazing projects as we continue to bring in more outstanding developers each week. As a Canadian, I can speak to the phenomenal level of talent across this country, easily observed from all the nominees, and this award is such a huge honor and a testament to the incredible team we’ve built in a short time, and a great validation of our future growth in the area.” said Dan Ayoub, Certain Affinity’s VP of Canadian Operations & Toronto GM 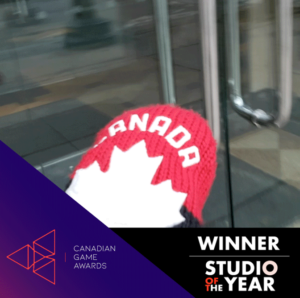 Canada is the third-largest developer of video games in the world and this award show celebrates Canada’s spot on the world stage as a leader in interactive entertainment.  This highly successful game studio recently passed 250 full-time employees across both its Austin and Toronto studios. The Toronto studio currently has more than 30 employees and expects to nearly double in size this year.

Certain Affinity recently celebrated its 14th anniversary as a company. It has a proven track record of developing innovative, triple-A action games, including both original titles and co-developed games in blockbuster franchises like Call of Duty, Halo, DOOM, and Left 4 Dead. Across its 14 years, it has developed or co-developed 32 products across 13 different franchises, with more than 100 million units sold. The Toronto location works in tandem with the Austin studio and is currently working alongside it on multiple projects, including an ambitious unannounced original IP game.

Certain Affinity is seeking a variety of skilled and passionate team members to join the company in Austin and Toronto, including artists, engineers, designers, producers, and more. Anyone interested in joining this growing independent AAA game developer can see a list of current job openings at certainaffinity.com/careers .